Inside the Brain of an Auto Lender

Which Type of Home Loan is Right for You?
Read More

Get a FREE email alert when we add new offers or resources to our site:

The interest rate charged on a loan, credit card, or mortgage over a year's time

The fee charged annually by a credit card company to its cardholders. This amount is added to the cardholder's statement.

An individual's credit rating is typically considered bad or poor if their FICO score falls below 620. Issues that drop a FICO score to such a level include defaulting on (failing to pay back) loans and credit cards, making payments past their due date, and/or carrying a high level of debt.

The fee charged by a credit card company when a balance is transferred to one of its cards. 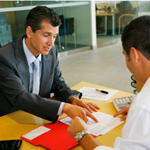 The American financial system has changed dramatically since the economic markets first took a hit in 2007, resulting in a tightening of consumer credit and lending in what has become known as the credit crunch.

With millions of workers being laid off since that time, many began having a difficult time keeping up with their payments and eventually defaulted on their personal loans and other lines of credit. Because lenders were no longer profitable on the loans they had been making before the credit crunch, they were forced to ration the amount of credit given and to raise interest rates on nearly every type of loan.

As this happened a new type of trend emerged in the world of personal loans: the microloan.

A microloan is a loan given to either an individual or small company that has a high likelihood of being repaid. This type of loan has much shorter payback terms than other types of loans, and is also for a lesser amount of money.

By making smaller loans over shorter periods of time, lenders are better able to manage risk and ensure that they earn a profit (no matter how small) for their efforts. These types of loans help the consumer bridge gaps in their pay periods, pay for unexpected emergencies, or otherwise keep them cash-flow positive when times are tough.

Though the world economy is now recovering from the credit crunch, the trend towards microloans is likely here to stay.